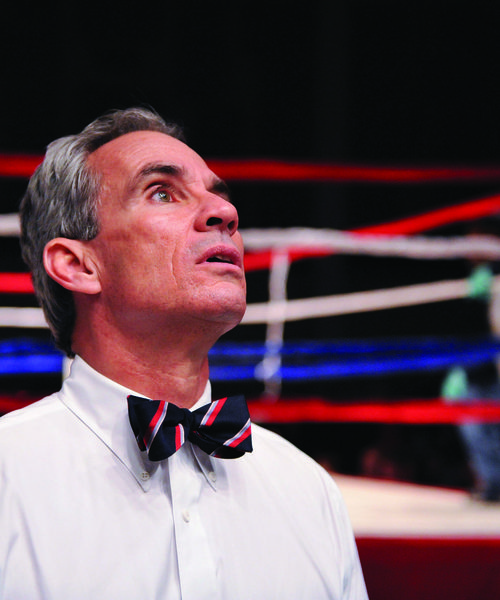 Thank you, Tom — for teaching us how to be strong and to never stop fighting.

He was there in the middle of the ring, in his signature starched white shirt and bow tie.

If he wasn’t there, he was in the corners of the ring, providing encouragement and instruction to the boxers.

When he wasn’t in either of those places, he was somewhere else at the Bengal Bouts.

Because, after all, for decades the University of Notre Dame’s club boxing program wore Tom Suddes’ name and heart on its sleeve.

For years they called him Coach — or O.G. (for Old Guy), a name he gave himself when his first grandchild was born.

In a sad and cruel bit of irony, the man who coached and mentored men’s and women’s boxers for a half-century at Notre Dame as part of those club boxing programs lost his own final health fight.

Suddes died in September 2016 after a two-year battle with amyotrophic lateral sclerosis (ALS), often known as Lou Gehrig’s disease. He was 67.

A 1971 Notre Dame graduate, a Bengal Bout captain and two-time welterweight champion and former member of the University development staff, Suddes returned to campus for weeks at a time each year to help coach the Irish boxers — the women in advance of the fall Baraka Bouts and the men in preparation for the winter Bengal Bouts. He also refereed more than 3,000 bouts over the years in Bengal Bout competition.

Suddes last returned to campus in February 2016 when he was honored at the Bengal Bout finals and was guest of honor at a pre-event reception.

Since his illness kept him homebound much of the time, there had been a steady stream of visitors to his Ostrander, Ohio, home in suburban Columbus to touch base with Suddes.

Among those were Jennie Phillips, longtime Notre Dame RecSports assistant director, and Linda O’Leary, widow of the late Rich O’Leary who coordinated the Bengal Bouts for years as part of his RecSports role until his death in 2009.

“We spent an hour and a half with him the summer before he died,” says Phillips. “He used a wheelchair and a walker, and it was hard for him to talk — but his wife, Trudy, helped interpret. We shared stories and looked at photos from the 40 or 45 years Tom had been involved with the Bengals. We talked about Nappy (Dominic Napolitano, the longtime Bengal Bouts director).

“Tom always had a sparkle in his eye. He went after life and never let this get him down. He was passionate about boxing at Notre Dame and the importance of the contribution to the Holy Cross Missions.

“To be in the shape he was in and come back to campus that time in February was an amazing thing for him to do.”

“He was known for his endless energy and passion for the boxers and for the Holy Cross Missions. Through the last five decades of boxing and training, he probably impacted more men and women at Notre Dame than anyone connected with any other sport.

“He displayed a unique love for his family, friends and boxers. He cared more about developing a young man or woman than boxing acumen. Coach often said, ‘Live. Love. Laugh. Learn. Leave Legacy.’

“Every pushup, every boxing match and every life-changing dollar raised for the Holy Cross Missions will add to his legacy. He was my coach, my mentor, my friend, and he will be missed.”

Suddes also served as a tactical officer in the United States Army, led a Notre Dame capital campaign which raised a then unprecedented total of $180 million — and in 1983 founded The Suddes Group, which has helped organizations worldwide raise more than one billion dollars. He founded 19 businesses.

“Coach Suddes was one of the craziest guys I ever met,” said 2003-04 Bengal Bouts captain Pat Dillon.

“Voluntarily, he set aside his own personal and professional life for six weeks every year to coach boxing in the middle of winter in South Bend, Indiana, for no money. He taught thousands of guys over the years not just how to box, but how to commit to something bigger than yourself.”

In a 2015 Notre Dame Magazine piece, Suddes discussed the lessons of the Bengal Bouts:

“Every year 12 guys won, and 238 guys lost. I teach the kids that getting in the ring is the hardest thing in the world. It’s petrifying. Almost to a man, and to a woman, now, anybody who’s participated has said it’s the best experience they’ve ever had at Notre Dame because it’s way more about life and the whole idea of participation and growing. You don’t grow just with success. The failing is really what contributes to growth.”

Suddes received an honorary monogram from the Notre Dame Monogram Club in 2014, just months before the ALS diagnosis.

For more than 40 years, Suddes worked side by side with the boxing clubs with Notre Dame graduate and current Chicago attorney Terry Johnson — with the duo combining to assist with coaching, training and then refereeing the bouts.

“I first met Tom Suddes when I was a freshman at Notre Dame starting with the boxing program, and he was a senior captain,” Johnson told The Observer in March 2016. “So he was kind of our idol. That was 45 years ago. He then came back and became a boxing coach, I went to law school, and we kind of started this avocation of trying to help out with the Bengal Bouts. So for the last 45 years, we’ve been down here together, and he’s just been such an inspiration.”

“I have never met a man with more positive energy and an incredible way to affect the lives of others, even while he was battling ALS.

“Tom had a huge impact on my life in and outside the ring. I’m grateful I met this man almost 10 years ago.”

Suddes always loved the idea that legendary Irish football coach Knute Rockne had his football players box in the offseason to stay in shape.

“For us it’s about three things,” he said. “It’s the physical — it’s the best possible physical workout you can have and Rockne knew that. It’s also all about the discipline, the mental attitude. The third part is about the heart and the courage. The ability to step into that ring, that’s a tough thing to do.”

Suddes also loved the saying that emblazoned shirts worn in many years by Bengal Bouts participants: “No timeouts. No excuses. No substitutions.”

“Nappy’s legacy lives on with each of us and each of them in this strong statement he made early on in the program: ‘Strong bodies fight so that weak bodies may be nourished.’ I don’t think Nappy would have any idea how strong those words are and what they mean to us today,” he once said.

The reaction to Suddes’ death was remarkable.

Said Nick Fellers, Suddes’ business partner: “Tom gave away everything — his time, his money, his love — but perhaps the greatest gift Tom gave was his spirit. This was the common gift among the thousands Tom impacted. And so his spirit lives in each of us that knew him.

This is the most remarkable legacy of all.

“So ‘Live Like O.G.’ is an aspiration and a reminder for us all: Believe that anything is possible. Live life fully — every day.

• Give — your love, spirit, time, energy, resources and counsel.

• Go on an adventure.

• Invest in experiences and people (over material possessions).

• Be a solution provider.

• Support and encourage those around you.

• Live a life that is creative, curious and fun.

“O.G. embodied every motivational phrase he’d ever said or written.”

“He was small in stature but a giant of a man. His enthusiasm and generosity with his time and his knowledge were inspirational.”

Shelly Stutz of the American Cancer Society came to know Suddes when he was hired to help ACS fund raising efforts.

“Once I experienced a training session and saw his passion, his straight-forward approach and his complete belief that anything was possible — I was hooked. OK — truthfully the jumping on and off tables and stools was pretty impressive, too. This guy had so much enthusiasm that I was convinced he didnʼt actually sleep.”

“Tom’s eyes seem to light up the most when he talked about what he did for six weeks every winter. He literally journeyed back to Notre Dame to help every student who wanted to participate train for the event he won twice during his time there.

“For a solid month and a half he immersed himself into the culture of boxing, personal growth and achievement. He loved everything it stood for and so many student boxers will always remember him for the spirit and confidence he gave them.”

Suddes made a name for himself as a thought leader, motivator, master facilitator and trainer, engaging speaker and prolific writer. One of his favorite quotes about success, “Wealth is an abundance of things you value,” best captured his infectious positivity, love of life and his quest to leave the world a better place.

In 1997, Suddes won a trip around the world from Success Magazine to share his experience with micro entrepreneurs in developing countries.

They called him O.G.
He lived life like anything but. 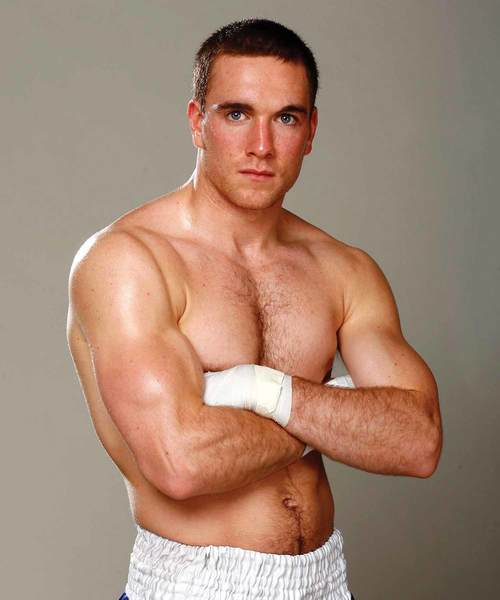 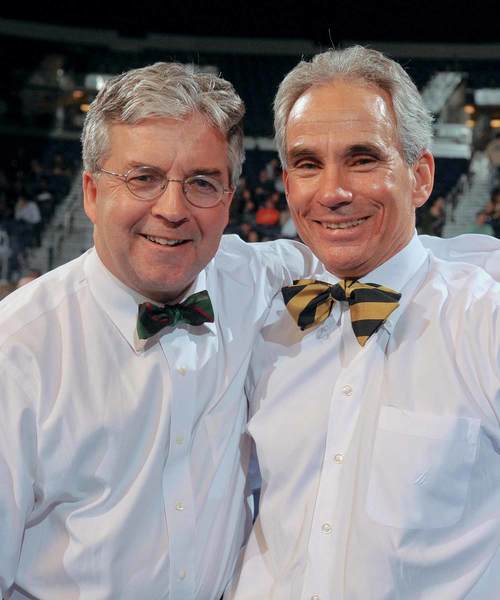