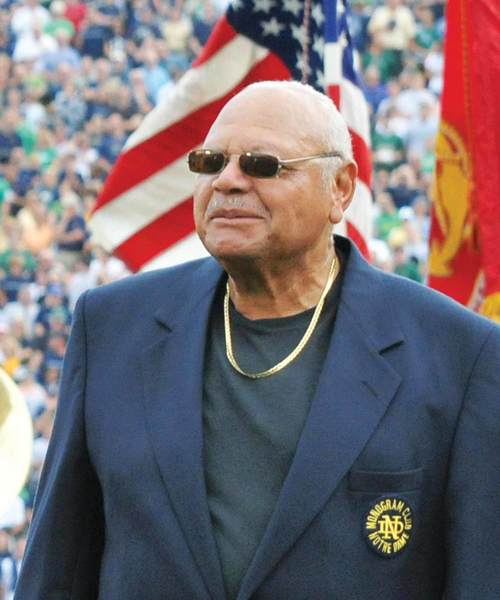 He Paved the Way

To many observers in football-crazed Western Pennsylvania, Wayne Edmonds appeared destined to attend nearby University of Pittsburgh, which had included African-American players on its roster since the mid-1940s.

Such a hometown hero path for Edmonds was put on hold when he received a call from Bob McBride, then the University of Notre Dame offensive coordinator and later a longtime resident of South Bend until his death in 2011.

Shortly after McBride’s call, Edmonds and high school teammate Jim Malone took a visit to Notre Dame late in the spring of 1952. The pair was housed in the modest accommodations of the campus firehouse and spent time visiting with four other Pennsylvania natives, each of whom grew up within 10 miles of Edmonds.

“Those guys told us about how much they loved the University and about the hard work that went into being a football player at Notre Dame,” recalls Edmonds, now residing in Harrisburg, Pa.

“Jim and I decided Notre Dame was the place for us. I just thought that I’d be more comfortable at Notre Dame and that it would be better for me later in life. It was the best place to showcase my skills and get a good education,” he says.

Notre Dame’s student body in the early 1950s trended to roughly 95 percent Catholic—resulting in a low number of African-Americans on campus at the time. But Edmonds was able to see beyond that challenging ratio and headed off to South Bend, eager to succeed as both a student and athlete.

A handful of African-American players had been members of earlier Notre Dame teams, but Edmonds and running back Dick Washington became the first black players ever to appear in a game for the Fighting Irish during their sophomore season in 1953. Both ultimately were awarded varsity monograms for their contributions during the unbeaten 1953 season (9-0-1), with Edmonds going on to earn two more monograms (including a starting left tackle role in ’55) while Washington enlisted in the Army following the ’53 campaign.

The 6-foot, 210-pound Edmonds was a versatile two-way player, able to excel at the tackle, guard and end positions. A bruising blocker on offense and devastating speed rusher on defense, he evoked gushing praise from one writer for being “a veteran smoothie who specializes in smothering quarterbacks as quick as a whistle … with speed and savvy.”

Edmonds, a devout Baptist, and the other African-American players on the team encountered periodic racial issues during road trips to the South, but they faced minimal hardships due to their race when it came to their everyday life as Notre Dame student-athletes.

“I actually experienced more racial issues in high school than I did at Notre Dame,” says Edmonds.

“I knew that Frank Leahy had black players on his teams at Boston College. When he came to Notre Dame, he wanted to have blacks, Jews and other minorities on the team. I even roomed in Sorin Hall with a Jewish player on the team, Frank Epstein, and we used to discuss our experiences with minority issues.

“Leahy was the law of the land and nobody questioned him. I had a lot of great teammates at Notre Dame and it was not a situation where you would have to deal with any racial issues.”

Leahy’s firm anti-racial stance was clearly seen early in the 1953 season, when Notre Dame was scheduled to play at Georgia Tech. The Irish were informed that Georgia Tech could not host a team with black players on its roster, but Leahy countered that he would cancel the game if Edmonds and Washington could not play—and a compromise moved the game to Notre Dame Stadium (Notre Dame won 23-14, for a 4-0 start).

When the Irish traveled to Oklahoma for the ’53 season opener, Edmonds and Washington were not allowed in the team hotel. They stayed at a separate hotel, with a handful of other Notre Dame players stopping to visit. The same thing happened at North Carolina in 1955. Edmonds and Aubrey Lewis and two white players roomed at a local diocese. The stadium in Chapel Hill in those days had segregated seating.

Edmonds spent the younger days of his childhood growing up in McDonald, Pa., before moving with his family to nearby Canonsburg, an area teeming with Polish and Italian immigrants. His father, Densel Edmonds, was a coal miner who worked nearly 40 years for U.S. Steel, in the Muse Mine and earlier at the McDonald Mine (made famous by Ernie Ford’s “16 Tons” song about “number-nine coal”), before later founding Edmonds Trucking. One of Wayne’s brothers, Densel Jr., ultimately worked 25 years in the mines while an older brother, Floyd, had been a high school football player in McDonald.

Fortunately for Wayne Edmonds—and for Notre Dame—he followed the lead of his brother Floyd and then some, becoming a four-sport standout at Canonsburg High School (now known as Canon-MacMillan). A three-time letterman in three different sports (football, basketball and track), Edmonds also lettered once in baseball and could have developed into a top catching prospect. His time of 10 seconds in the 100-yard dash held up as the Canonsburg High School record for nearly 50 years, and he captained the football and basketball squads as a senior, when he led the Gunners to the 1951 Western Pennsylvania football title.

Edmonds also followed in the footsteps of one of his heroes, Leon Hart, the former Notre Dame end and Western Pennsylvania hero (from Turtle Creek) who won the 1949 Heisman Trophy.

“When I went to Notre Dame, I even got to wear Leon Hart’s number 82,” says Edmonds.

“He was a player I really looked up to, because he could do it all on offense and defense. I could run well when I caught the ball and my senior year we did not have a kicker, so they had me run in the extra points and we always scored,” he says.

During his years at Notre Dame, Edmonds became good friends with Joe Bertram (the school’s first African-American basketball player) and later filled a similar role as mentor to Lewis, a talented all-around athlete from New Jersey. Lewis—often overlooked among Notre Dame’s “trailblazing” African-American athletes—ended up being a starting halfback on the football team and an All-America hurdler in track and field.

“Aubrey was a tremendous physical specimen and could have competed in the Olympic decathlon, if not for injury,” says Edmonds.

“I was like a big brother to Aubrey and showed him the ropes, but he went on to do great things as one of the first blacks in the FBI and later a vice president for Woolworth’s.”

Edmonds became socially aware and active during his days at Notre Dame, as a regular reader of the black press. His campus speech about the Emmett Till case once helped encourage some white Notre Dame students to make donations to the NAACP.

Several years after graduating with a degree in sociology, Edmonds was summoned back to Notre Dame at the request of executive vice president Rev. Edmund P. Joyce, C.S.C., to assist in establishing a black studies program at his alma mater.

Virtually all of Edmonds’ life after Notre Dame has been geared to helping others. He received his graduate degree from the University of Pittsburgh in the late 1950s before spending five years as a social worker for the Veterans Administration at University Hospital. He was dean of students at Pittsburgh’s School of Social Work from 1967–71 and then spent several years helping oversee the United Mine Workers health care programs in the Midwest. Most recently—for 15 years, prior to his retirement in 1992—Edmonds worked for the state of Pennsylvania as a public health executive, helping to pattern the state’s programs after the President’s Council for Physical Fitness and Sports.

“My experiences at Notre Dame reinforced things I grew up with—that with hard work and good relationships, you can go a long way,” says Edmonds, whose nephew, Sidney Ribeau, was named president of Howard University in 2008 and considers his Uncle Wayne among his most treasured role models.

“Notre Dame gave me an opportunity to see where I had something to give to others,” he says.